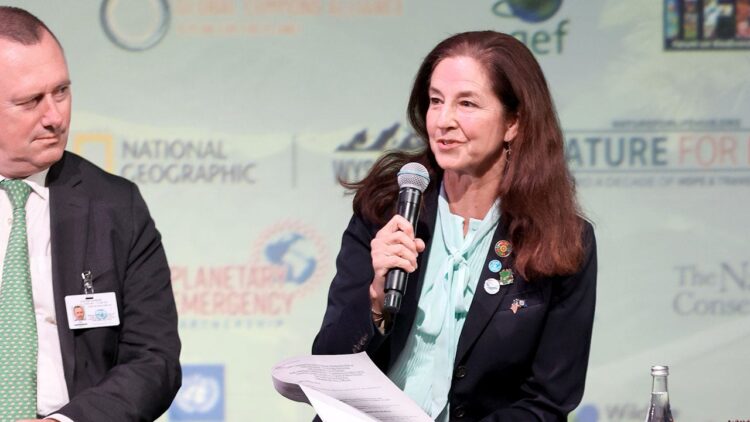 The Biden administration has created a new diplomatic representative for environmental concerns like water and biodiversity, and tapped the wife of White House chief of staff Ron Klain to take on the role.

Monica Medina, a proponent of the Green New Deal and currently an assistant secretary at the State Department for Oceans and International Environmental and Scientific Affairs, will be the first “Special Envoy for Biodiversity and Water Resources,” the State Department announced Wednesday.

Medina’s appointment signals “the Biden-Harris Administration’s commitment to resolving the world’s intertwined biodiversity and water crises,” according to the announcement, and will help the U.S. confront issues, raise “global ambition” for climate causes and help secure a healthier planet for future generations, the State Department said.

“There’s a direct connection between biodiversity loss and instability in a lot of parts of the world,” Medina said recently, according to the Washington Post. “It’s not just about nature for nature’s sake. I think it is about people.”

Biodiversity, which refers to the thriving of plants and animals in various ecosystems, and maintaining clean, safe water sources for human use, are both crucial to establishing equity, building inclusive societies, keeping economies moving and ensuring food availability, the State Department said.

But things like the “climate crisis,” as well as “nature crime – including illegal logging, mining, land conversion, and wildlife trafficking – have deep and detrimental impacts” on biodiversity, the State Department said.

Prior to being nominated in April 2021 to her current State Department job, Medina was a Georgetown University professor and co-founder of Our Daily Planet, “an e-newsletter on conservation and the environment,” the White House said at the time.

In a 2019 column for Huffington Post, Medina said “The Green New Deal is a unifying political message that gets back to the basics of creating an economy that works for all people and protects the planet as a result.”

Thomas Phippen is an Editor at Fox News.