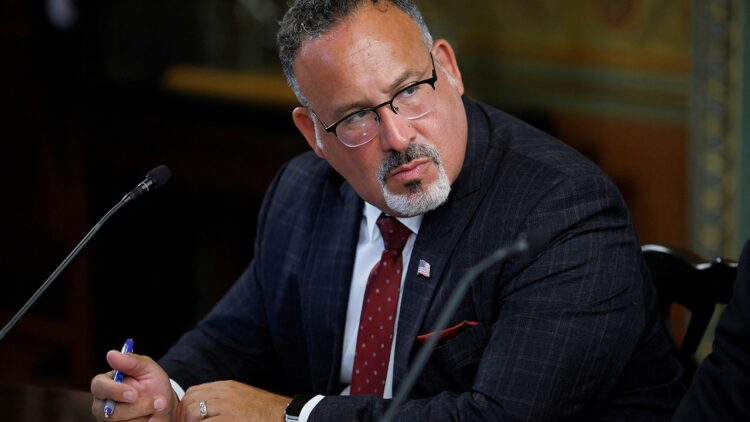 FIRST ON FOX: A bipartisan pair of senators accused the Department of Education of dragging its feet when it came to protecting students from sexual predator teachers.

The senators wrote the report “examines state laws, regulations, and policies to ensure that certain school employees with a known history of engaging in sexual misconduct with minors cannot transfer schools without consequence.”

“Under Section 8546 of the Elementary and Secondary Education (ESEA), states are required to have such laws, regulations, or policies in place as a condition for receiving federal grant dollars,” they wrote. “As you know, Section 8546—a provision we both sponsored—was enacted on December 10, 2015, as part of the reauthorization of the ESEA.”

Toomey and Manchin detailed the tragic origin of their sponsored provision: a “12-year old student was raped and murdered by his vice principal in West Virginia” after the vice principal moved to the state from Pennsylvania.

The vice principal “had previously sexually assaulted a different student while employed at a school” in the Keystone State and instead “of being fired for misconduct, he was allowed to quietly resign and transfer to a new school in West Virginia, with tragic consequences.”

“In 2010, the Government Accountability Office (GAO) found that ‘school officials allowed teachers who had engaged in sexual misconduct toward students to resign rather than face disciplinary action, often providing subsequent employers with positive references,'” the letter said. “In the first six months of 2022 alone, preliminary searches of news sources illustrate at least 181 K-12 educators and administrators were arrested for child sex crimes, including sexual assault of students and possessing child pornography.”

The senators wrote their “legislation sought to end this horrific practice, known as ‘passing the trash’ or ‘aiding and abetting sexual abuse,’” but “seven years after its enactment, the patchwork of state laws identified in the Report show that many states have failed to sufficiently prohibit the practices that contributed to a student’s death, such as the false letters of recommendation that allowed a school employee to transfer schools with a ‘clean’ record.”

They also wrote that the report’s findings “underscore the need for stronger enforcement to ensure that states comply with this important provision of law.”

Additionally, Toomey and Manchin said they “are concerned that the Department has yet to put into place a concrete timeline by which states must come into compliance.”

“The Department began work on this Report in October 2019 and entered into a contracting agreement with an outside entity to complete a survey of all 50 states and the District of Columbia,” the letter reads.

“Data in the Report was collected through a survey of state entities, who answered questions about the status or types of laws in place in each state, as well as thorough reviews of public laws, regulations or policies,” it continues.

“Ultimately, 48 state educational agencies (SEAs) or SEA representatives participated in the survey, which took place throughout October 2020,” the senators added.

The senators said the report found that “all 50 states and the District of Columbia require employers to complete criminal background checks on prospective school employees as part of the hiring process” and “acknowledges that these laws do have limitations, including that ‘applicants with a record of sexual misconduct in other states might omit or falsify their prior employment history on a job application’ without facing legal ramifications.”

“In addition, at least 35 states had at least one other law, regulation, or policy in place to protect students by using one of four major categories of protection: (1) requirements on prospective employers to evaluate an applicant’s past; (2) mandatory disclosures for job applicants; (3) information collected from current or former employers; and (4) prohibitions on suppressing information.”

“However, the Report also revealed that, at minimum, 32 states do not have policies in place to meet the baseline requirements of Section 8546,” the senators continued, outlining the shocking findings of the report.

The report found that only “19 SEAs believed that existing state laws and policies in their respective states were sufficient to meet the requirements of Section 8546” and “18 SEAs ‘monitor district compliance with state laws or policies’ to prohibit the practice of aiding and abetting sexual misconduct.”

“These findings show that the Department has significant work to do to ensure that states are aware federal funding they receive is at risk if they do not comply with the law,” the senators wrote.

Toomey and Manchin called on the Education Department “to provide this requested assistance” and pointed to Cardona’s own words in Senate testimony on how the department will “strengthen the system.”

“We urge the Department to immediately put the recommendations from this Report into practice to ensure that all policies in place to protect children are enforced, especially the ESEA’s prohibition on aiding and abetting sexual abuse,” the senators wrote. “Specifically, we urge the Department to issue formal guidance to states to ensure states are fully aware of how they can comply with their obligations under the law.”

The senators probed the secretary with several questions, including if the department has “identified any challenges to enforcement” of Section 8546.

The letter comes as at least 135 teachers and teachers’ aides have been arrested so far this year on child sex-related crimes in the U.S., ranging from child pornography to raping students.

An analysis conducted by Fox News Digital looked at local news stories week by week featuring arrests of teachers and teachers’ aides on child sex-related crimes in school districts across the country. Arrests that weren’t publicized were not counted in the analysis, meaning the true number may well be higher.

The analysis found that at least 135 teachers and teachers’ aides have been arrested in 41 states between January 1 and May 13, which works out to about an arrest a day on average.

The vast majority of the arrested educators were men.

Houston Keene is a politics reporter for Fox News Digital.  Story tips can be sent to Houston.Keene@Fox.com and on Twitter: @HoustonKeene