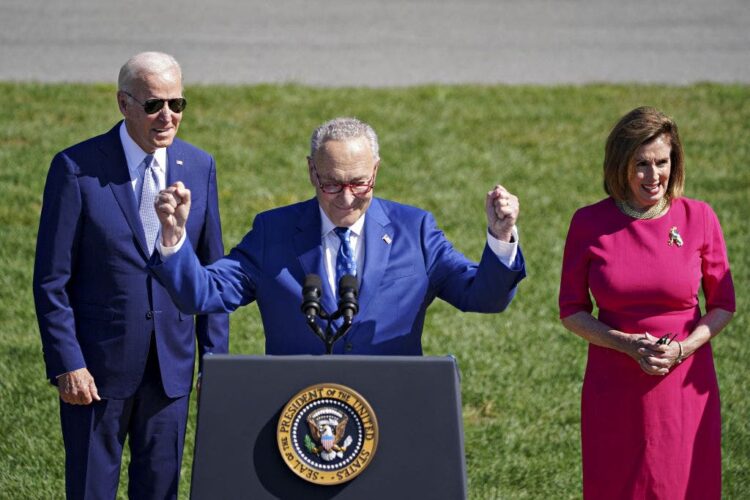 In an 72-25 vote, the Senate passed a funding measure meant to keep the government afloat until December 16. Senate Majority Leader Chuck Schumer said the more than two-month extension would allow lawmakers from both sides of the aisle one last chance at negotiating a year-long budget deal before the new Congress takes office in January.

“Let’s hope this is the last [stop gap], they do so we get an omnibus [budget] done in December,” said Schumer, D-N.Y.

The funding bill now heads to the House where Speaker Nancy Pelosi, D-Calif., is expected to pass it before the September 30 deadline at which funding for the federal government runs out. Pelosi and Democrats are confident they have the votes for passage, despite the active opposition of House Minority Leader Kevin McCarthy and GOP leadership.

“We’re on track to be able to move forward with funding the government in advance of the deadline,” said House Democratic Conference Chairman Hakeem Jeffries, D-N.Y., Thursday.

While House Republicans are whipping against it, the legislation is expected to pass given that only a simple majority is needed in the Democratic-controlled chamber.

GOVERNMENT ‘SHUTDOWN’? MOST OF THE GOVERNMENT WOULD KEEP FUNCTIONING AND FURLOUGHED WORKERS ARE PAID BACK

The bill includes over $12 billion to help Ukraine continue its blood war against Russia. The new round money is set to boost to more than $65 billion the total amount Congress has approved to helping Ukraine stave off collapse.

The stop-gap also includes more federal funding for the resettlements of Afghan refugees, disaster aid for Kentucky and Mississippi, and new subsidies for winter heating assistance for low-income and elderly Americans.

“This [bill] is filled with many good things that both sides can support,” said Schumer.

The deal would not have come together without the help of Senate Minority Leader Mitch McConnell, R-Ky.

Given the Senate’s 50-50 split between Republicans and Democrats, McConnell’s backing is decisive in averting a government shutdown. For the spending bill to pass, at least 60-votes were needed to overcome the filibuster.

Earlier this week, McConnell lined up 22 other Senate Republicans behind the government funding deal — more than necessary to move the bill forward. McConnell backed the stop-gap package after garnering some concessions from both the White House and Senate Democrats.

First, President Biden dropped his request for the legislation to include $22 billion in additional coronavirus relief funding. Then, Democratic Sen. Joe Manchin, of West Virginia, dropped his push to include an overhaul of oil and natural gas drilling that Republican leaders opposed.

“The path to keeping the government open and funded has been clear for weeks now,” said McConnell. “The solution was always going to be a clean bipartisan [bill] negotiated by [the members of the Appropriations Committee], without any unrelated partisan language jammed in.”

McConnell also helped strike a deal with Schumer expediting the time needed to debate and pass the government funding bill.