You Call That Snow?! See How This Winter Stacks Up. 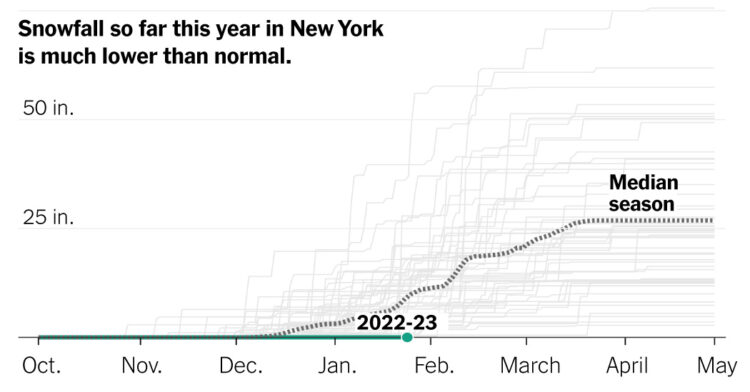 Have you been crossing your fingers for snow? If so, you’re not alone: It has been a dreary winter for children hoping for snow days and grown-up snow enthusiasts alike on the East Coast.

Midway through the winter, New York and other major cities along the I-95 corridor are experiencing some of their least snowy seasons in the last 50 years. While pockets of the country have been pummeled by snowstorms, metropolitan areas along the East Coast have remained in sneaker weather, with snow boots collecting dust in the closet.

More than 50 years of snowfall in …

Interactive line chart showing cumulative snowfall for each winter season over 50 years, as well as the median snowfall for all seasons. The default view shows that snowfall so far this season in New York is much lower than normal.

Despite snow flurries on Wednesday, New York’s Central Park remains without a measurable snowfall, a technical definition that starts at a tenth of an inch. That means the city is on track to beat its record of latest first snowfall, currently set at Jan. 29.

Washington, Philadelphia and Baltimore also have yet to receive a measurable snowfall.

Line chart showing Philadelphia’s cumulative snowfall for each winter season over 50 years. Snowfall so far this winter is much lower than normal.

Line chart showing Boston’s cumulative snowfall for each winter season over 50 years. Snowfall so far this winter is much lower than normal.

Boston and Providence have seen more — a little over half a foot for Boston, and a little under that for Providence — but those amounts are still below typical. And Newark has received a measly tenth of an inch of recorded snow.

A table that categorizes 59 U.S. cities based on how this winter’s snowfall compares with the historical record, starting with the 1969-70 snow season.

Less snowy than 90% of all years


Conditions were already in place for a relatively snowless start to winter up and down I-95: The region has been warmer than usual, thanks in part to La Niña — a recurring climate pattern originating in the Pacific Ocean, now going on its third consecutive year. And the storms that have blown through the country have followed somewhat more typical La Niña storm tracks, skirting the coastal mid-Atlantic, said Judah Cohen, a climate scientist at the weather-risk assessment firm Atmospheric and Environmental Research.

But it’s also true that snowfall varies immensely season to season, and that luck — good or bad, depending on how you feel about snow — has had a hand in this season’s snow drought.

“A lot has to come together right to get snow along the coast,” Mr. Cohen said.

With this dearth of snow, New York has fallen more than a month behind its average pace: The city usually sees snow by mid-December. The latest that Philadelphia has seen its first snowfall for a season is Feb. 3 — except for the winter of 1972–73, when the city got no measurable snow at all. Washington and Baltimore also typically see snow by mid-December, but late first snowfalls are slightly more common. Both cities have recorded a season’s first measurable snow as far out as mid-February.

There’s still a chance for decent snow along the East Coast, said David Robinson, New Jersey’s state climatologist and a professor at Rutgers University. February is the snowiest month in the mid-Atlantic, and, of course, snow can still arrive in March and even April. There are also signs that La Niña may be ending, and that the polar vortex could send in another wave of cold air, both of which may herald somewhat better odds of a snow day, he said.

“The tides could turn,” he said. A big snowstorm is “never out of the question, even in mild winters.”

Outside of the I-95 corridor, Chicago has also fallen nearly 10 inches below normal levels. Minneapolis, however, is seeing one of its snowiest winters of the past half century. Further west, Reno, Nev., has seen atypically high totals, and the nearby Lake Tahoe area has been hit with storm after storm — while torrential rains have poured across other parts of California.

Line chart showing Chicago’s cumulative snowfall for each winter season over 50 years. Snowfall so far this winter is much lower than normal.

Line chart showing the cumulative snowfall in Reno, Nev., for each winter season over 50 years. Snowfall so far this winter is higher than normal.

This winter’s extreme variation can be seen just in a single stretch of upstate New York. Syracuse is one of America’s snowiest cities, averaging more than 120 inches annually, but it has received just 25 inches of snow so far, putting it three feet behind the norm for this time of year. Nearby Rochester has received fewer than 15 inches, compared with a typical 50 by this time.

Yet just to the west of both cities lies a pocket of intense snow: Buffalo is having one of its snowiest winters in the last 50 years. Around half of this season’s snow was dropped during a single, deadly blizzard.

Line chart showing Buffalo’s cumulative snowfall for each winter season over 50 years. Snowfall so far this winter is much higher than normal.

Line chart showing the cumulative snowfall in Syracuse, N.Y., for each winter season over 50 years. Snowfall so far this winter is much higher than normal.

That kind of concentrated — and often dangerous — snowfall is likely to become more common as the climate warms. Projections show that warmer temperatures will mean fewer and more intense snowstorms, because warmer air can hold more water vapor: A snowstorm at 30 degrees has the potential to unleash more precipitation than the same storm 10 degrees colder.

Climate change won’t necessarily mean less snow, Mr. Cohen said, but it will probably mean later first snows, and patchier snow, dumped all at once in a big storm or two.

“Snow is very variable,” he said. “Climate change, I think, has taken kind of a volatile situation and made it even more volatile.” 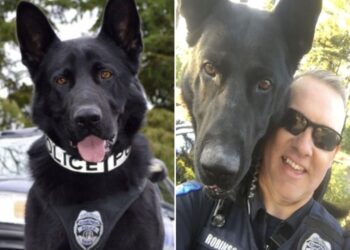 Working like a dog! An 11-year-old Washington police dog will... 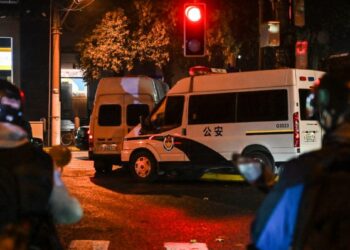 SWIFT CRACKDOWN China's government and state media apparatus have made... 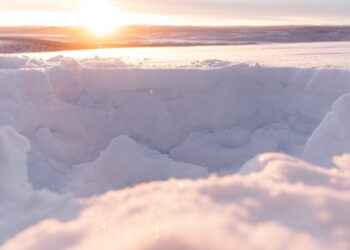 The Swedish town of Kiruna will be moved building by... 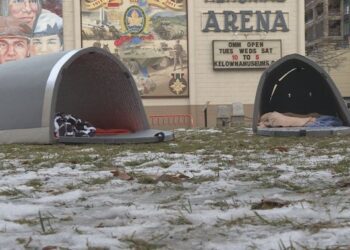 The City of Kelowna is taking a page out of... 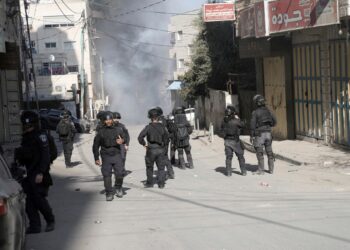 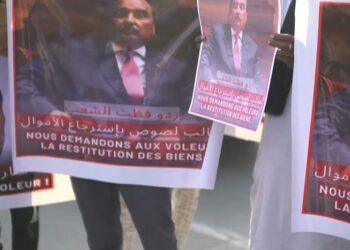 You Call That Snow?! See How This Winter Stacks Up.

Economy likely slowed but stayed solid to end the year